These are some important questions I think will be helpful; you can relax and read them, it can help at some level,

but what most important among all, is you must do the question by yourself at least all the homework questions and all the examples professor show in the class.

* Please think about the solution by yourself too, in case if I made any typo or mistake.

* Notice, all the bold font on this page, means that variable is a vector, for example... E

a) Find E at P(0,0,z), given a quarter circle of line charge density ρL along the line (the green line) shown in Figure 1. 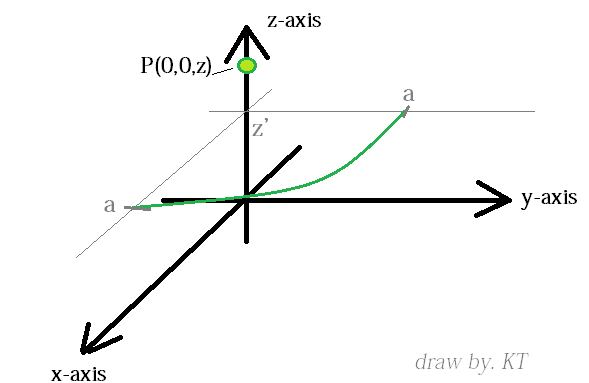 SOLUTIONS 1a) (notice, my solutions is relative longer than what you need to wrote, you do not need to follow some non necessary steps)

To solve this question; first we need  to processed the 5- main steps .. they are following...

Notice, r is where our reference point at, that is the Green Point on the z-axis

Any point along that green quarter circle line in cylindrical coordinates can write as (ρ , φ, z),

ρ: where you given the constant radius as ρ = a

z: where you given the constant high z as z = z'

φ: where your only changing (non-constant) variable is φ

since in Step 1, we are already in "Cartesian Coordinates", we need to change r' into the same coordinates system - Cylindrical Coordinates,

in your formula sheet, you should able to find the equation on pages 3,...

and you can check your result directly by visual 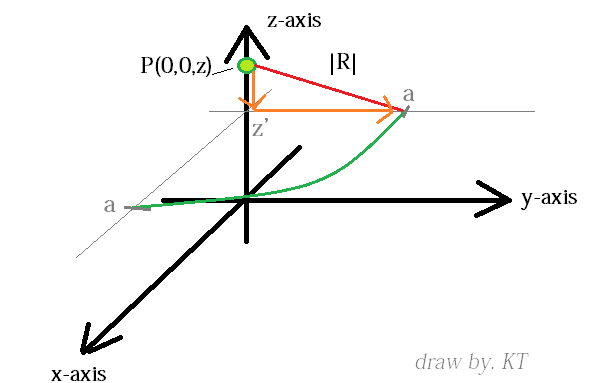 based on pythagorean theorem.; the red line will have the distance ...

What is the change of the enclosed charge along the line, its same as the line charge destiny,

which is ρL, therefore, the dQ will be...

Now we have following...

Put them into the Electric Field intensity (E) equation for line...

* Remember to write the unit in your final answer, the unit for E is either V/m or N/C

First of all, you should able to visually see the Line of that quarter circle is now forming a full circle (as I shown in Figure 2) 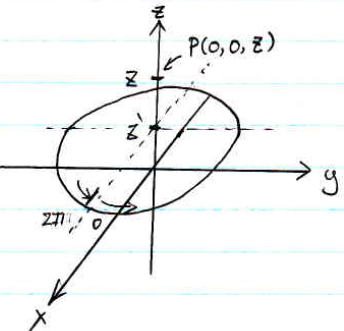 Noting really change, therefore, you can continue from the last steps from 1a), which we still have the following..

As you can double check your final answer's vector part, you can see there is only part az left,

if think visually as all the symmetric vector of Electric Field on the same plane cancel out, left only the vertical direction upward .. az 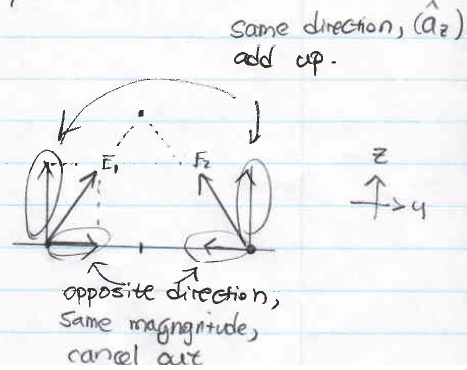 Given a sphere with a hollow sphere inside and located at the centred at the origin, as shown in Figure 3

The hollow sphere part has a radius of "a", and the bigger sphere have the radius of "b"

a) Find total charge contained in the sphere.

Its similar, you can see the relationship between Charge and Charge Density as following...

Select the volume one,

and the boundary for "r" is between a and b, b/c that is where the charge is located.

First, before you start, take a look at the volume charge density, which is ρv = αr

and this equation only applied between charged region (which is between r= a to r = b),

therefore, I can draw a equation of ρv = αr as following...

(notice, you don't have to do this on the exam).

Similar as what we did in 2a), but the different is that this time,

the r is bounding between r= 0 to r, where r is less than a, 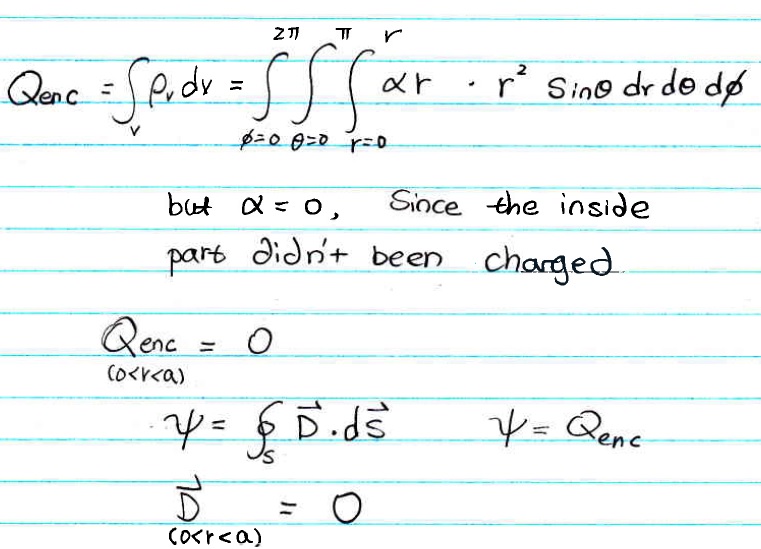 The boundary for r is the same as from 0 to r, where r is between a and b.

(common mistake, the upper boundary of "r" is NOT b, notice, r is less than b but greater than a, 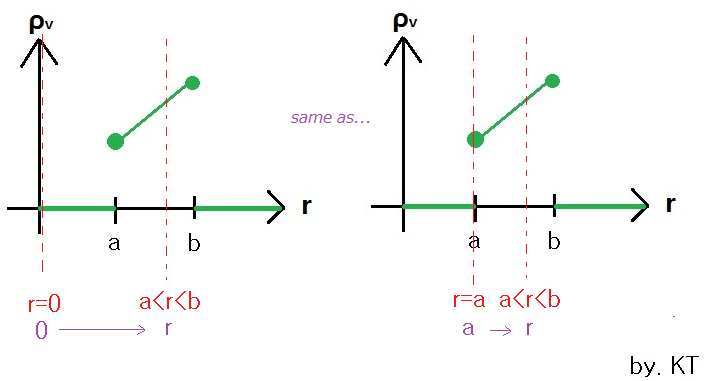 you can than wrote down Qenc for a<r<b as following. 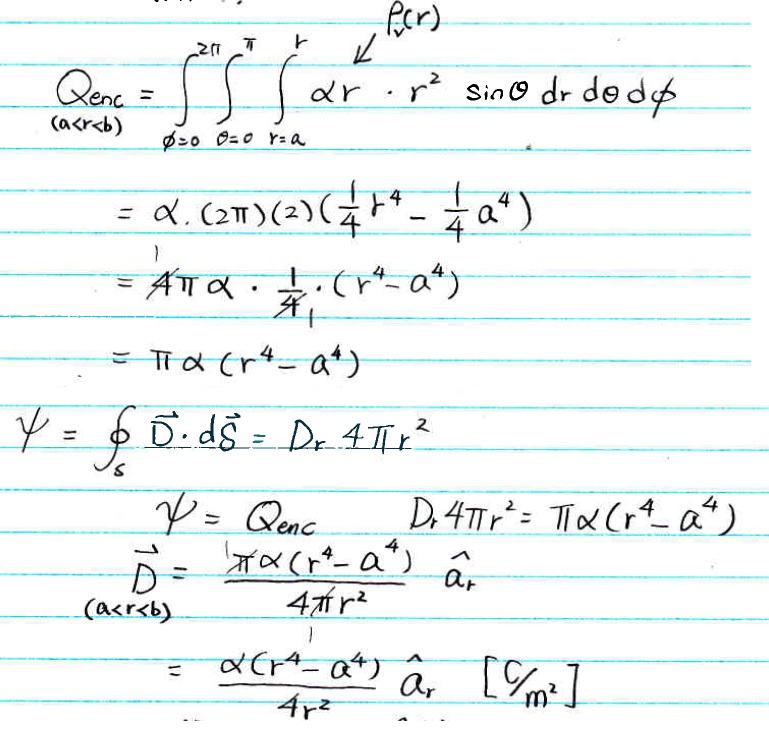 The boundary for r is the same as from 0 to r, where r is greater than b.

The upper boundary will be b. (as shown in diagram, the lower boundary of r become "b" instead "r" since from b to r there are no more charge)

more than b, its already make charge density at full level, the upper boundary is a fixed variable as b) 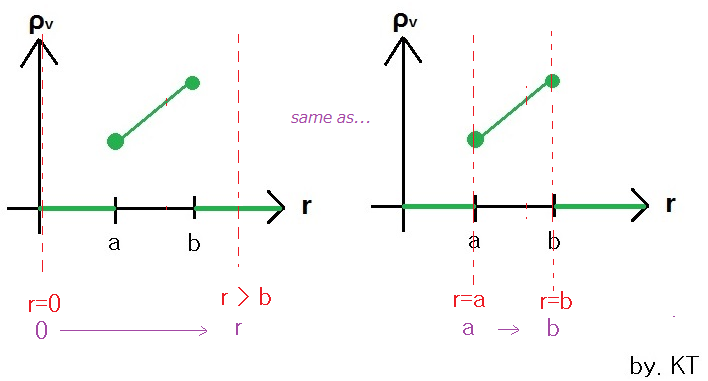 you can than wrote down Qenc for r>b as following. 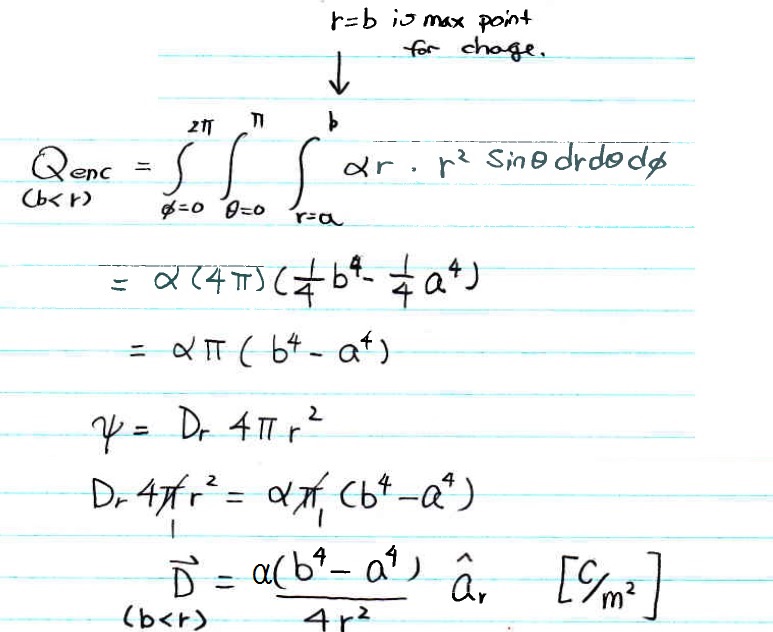 Finally, we got the D for each region as...

which are the same type question, just use different coordinate system)

First, you need to check which coordinate system does it belong to...

in case we have θ and r, you notice we are in "Sphere Coordinate"

a) First, write down this relationship... 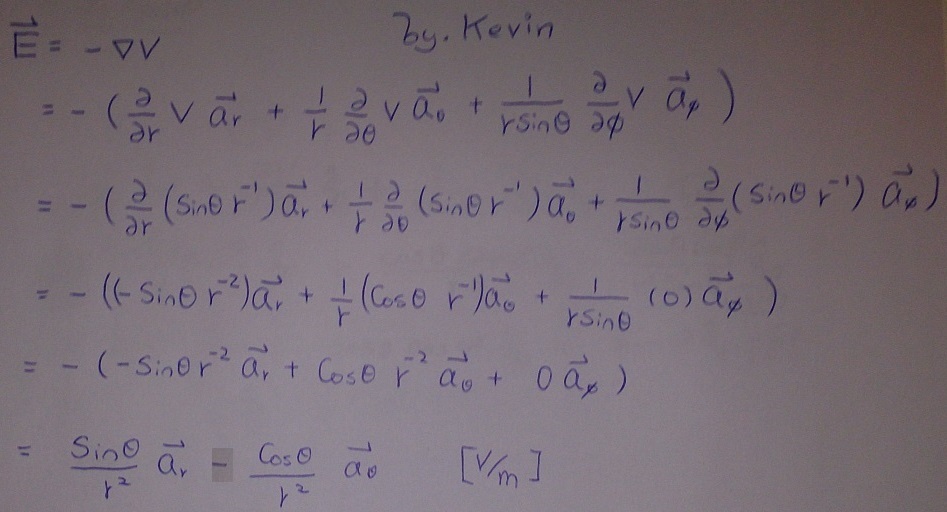 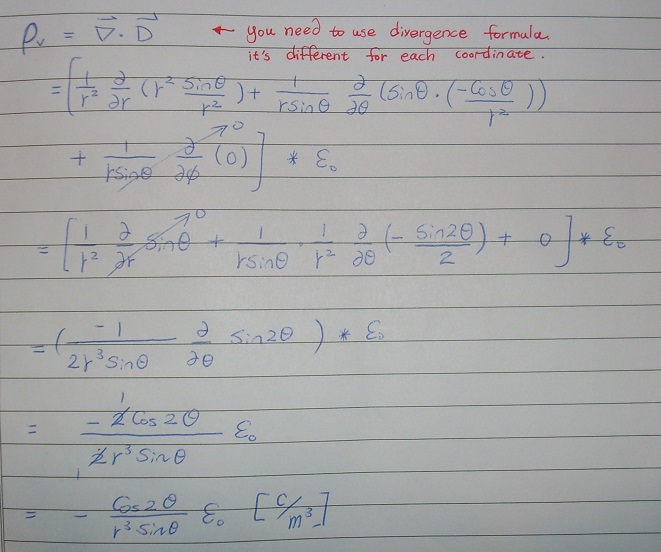 the box is been placed between two conducting planes located at y = 0 and y = k.

If the polarization vector field inside the dielectric  material is

First, some student told me they didn't know dielectric is covered for the midterm,

which it is covered, so please read them, at last tutorial, we covered this question, so please review it too :)

To start with the question (I changed it),

you can draw that box out, which should be easy for you. 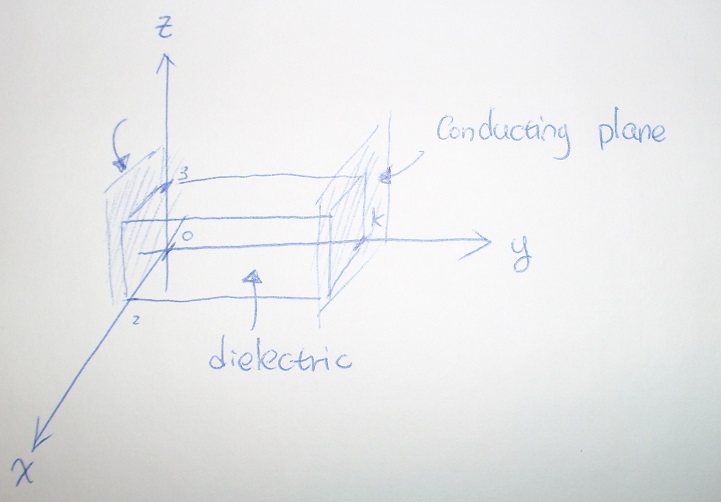 a) There are relationship between P and E, please review Chapter 5.

You need to use the following relation 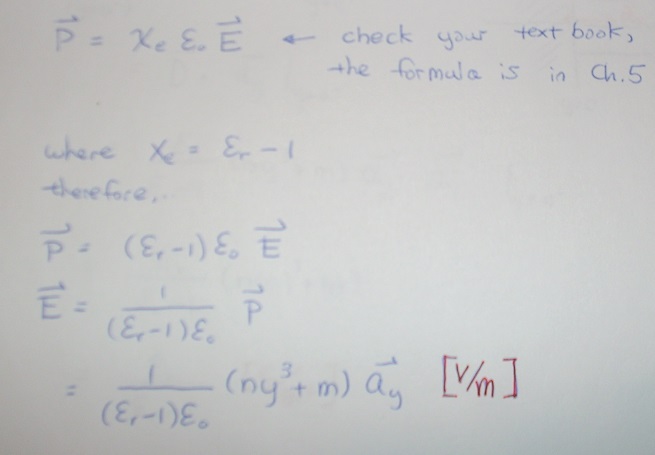 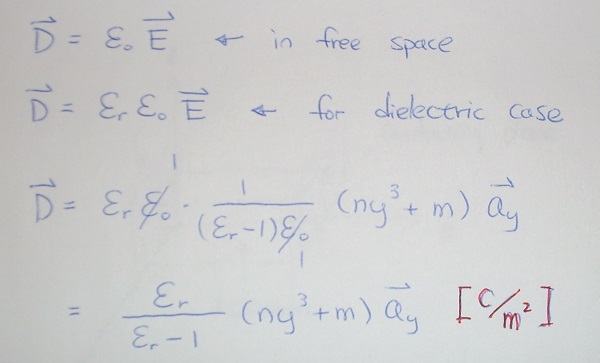 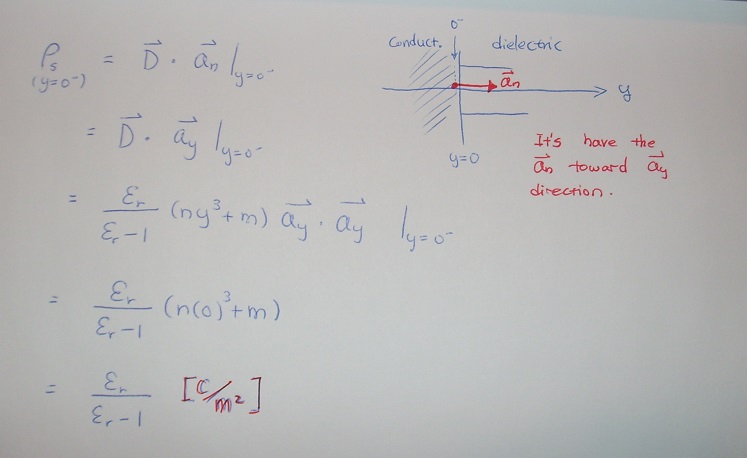 however, this time your an become −ay 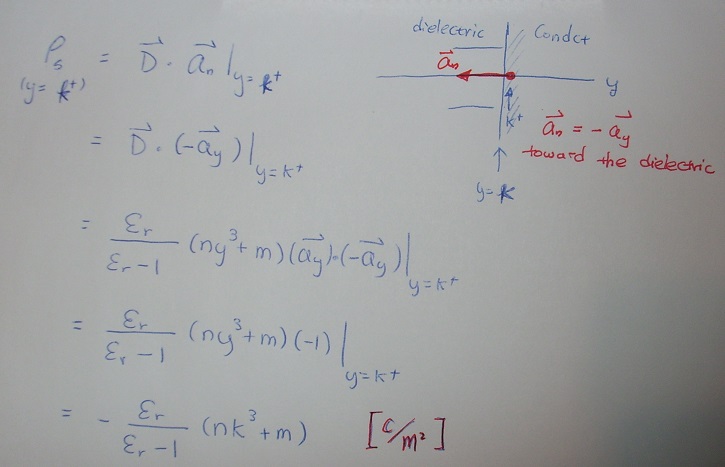 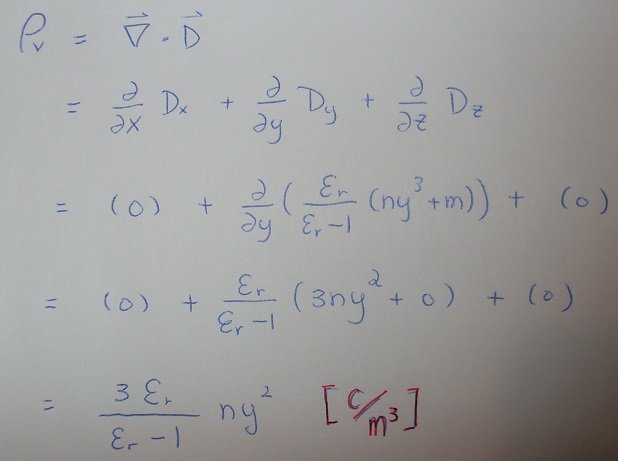 f) ρps  is called polarization surface charge density, similar as what you did above

just you are looking at dielectric part instead of condt part, at y = 0+ 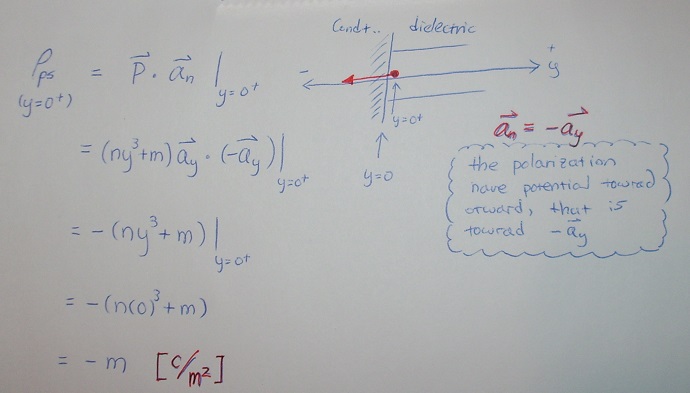 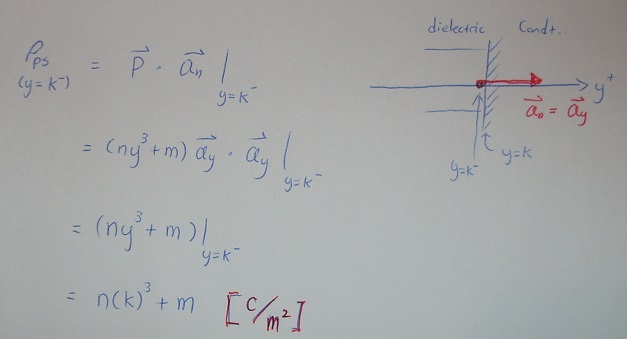 h) Very similar as you find in part e), the equation for

Sine some people asked, remind you,

Don't forget the unit in your final answer

Don't forget what I said in the tutorial class,... good luck, wish you all the very best :)

You may leave me any message if you have any questions, I will try to answer ASAP, thanks and good luck :)